The Carolina Panthers officially ushered fans out of the Ron Rivera era on Tuesday when they signed a new head coach, Matt Rhule, the smock-wearing former head coach of the Baylor University football team. Rhule will be the fifth head coach in Panthers franchise history.

Rhule has a reputation for turning college programs around, bringing Baylor from a 1-11 record in 2017 to an 11-3 record and a Big 12 championship game berth in 2019. Before that, he took Temple University from a 2-10 record in his first season to consecutive 10-win seasons and an American Athletic Conference championship in 2016.

He’ll be taking over a Panthers team that’s coming off a disappointing 5-11 season. Rhule has experience in the NFL as an assistant coach with the New York Giants in 2012, coaching the offensive line.

Before making the trip to Charlotte, Rhule spoke to media outside of his Waco, Texas, home on Tuesday. He discussed how he became familiar with Charlotte and the surrounding areas during his stint on the Western Carolina University coaching staff from 2002-2005.

“I recruited Charlotte forever. I recruited Rock Hill, Greenville, Spartanburg, all those areas where we’ll be, so I know the area,” he said. “At the end of the day, I’m a competitor, so it’s a chance to go coach at the highest level and hope that someday you can hoist a trophy over your head and say that you were the best and your team was the best. Professionally, it’s a great opportunity, while at the same time going to a place that we’ve been, that we’ve lived, that we know the life that we’re getting into and we’re excited about.”

Entities led by N.C. developer, business leader and attorney Tom Hendrickson have closed on development and leasehold rights for Charlotte’s Brookhill Village and announced a proposed New Brookhill renewal project for the area created in collaboration with key community stakeholders, including South Tryon Community Development Corporation, according to a press release put out on Wednesday.

Brookhill Village is one of the last remaining vestiges of affordable housing in the city, with rents averaging below $500, but it has fallen into disrepair over the years. In 2018, local photographer Alvin C. Jacobs Jr. and curator David Butler opened the Welcome to Brookhill exhibit in the Harvey B. Gantt Center, highlighting the vibrant family life of residents still living in a place many have written off as abandoned or dilapidated.

As proposed, New Brookhill will include a 324-unit multi-family apartment rental community featuring three-story flats and two-story townhome Energy Star-compliant buildings on approximately 15.5 acres on the site of Brookhill Village. The proposal includes 65 units for people making 30% or less of the area median income (AMI), 97 units at 60% AMI, two units at 80% AMI, and 160 units at market rates. The community will also include 16 fully accessible units. Additional facilities will include an office, community center, computer center, laundry facility, pool, pool house and recreation center. Current Brookhill residents will get first priority in the new development, so as to avoid displacement.

“New Brookhill will prove that we can walk the walk and not just talk the talk that ‘Brookhill Matters’ for Charlotteans from a wide spectrum of incomes and backgrounds,” Hendrickson stated in the release. “Affordable housing is a community priority in Charlotte and our proposal for this historic area prioritizes current residents for affordable housing opportunities. Now, we are hopeful that the Charlotte community will step up as partners in this effort with funding resources to make this vision a reality.”

As many in the Charlotte area know, the city saw a large spike in homicides last year, ending at 107 murders within city limits, a 90% increase from 2018. The high homicide number was part of a 12% increase in violent crime and a 6% increase in crime overall.

Putney said homicide detectives have cleared about 80% of the homicide cases that occurred last year, and although he’s proud of that number, it’s not good enough.

“You might ask why we have so many [murders]. I wish I could answer that question,” he said. “What I can tell you is the reasons are petty, minor arguments over drugs, over social media posts, over small amounts of money — $20 in some situations. So all of those are tragic losses of life over very, very minor disagreements.”

Putney said that preventing violent crime will continue to be CMPD’s top mission. He emphasized that CMPD made nearly 18,000 arrests in 2019, including more than 3,000 violent crime arrests, a 19% increase from 2018. He also said that CMPD will be implementing a new violence reduction strategy that is community-based, evidence-based and data-driven.

Putney also recognized the importance of proactive organizations such as the ones funded by the city’s JumpStart microgrant program. He recognized Shaun Corbett with Cops & Barbers and Greg Jackson with Heal Charlotte, both of whom were in attendance on Friday.

Putney also stated that CMPD will be releasing an “accountability report card” later this year, in which the department will track its felony arrest stats further through the justice system. The new report comes on the heels of a year in which the CMPD has publicly decried policies from the Mecklenburg County Sheriff’s Office and Magistrate that they say make it easier for potentially dangerous criminals to return to the streets.

“I don’t think anybody should be able to hide,” Putney said. “I’ve had people say I’ve called out the judges and I’ve called out the magistrates. Well, get used to it. This is my last year. If there are other people to call out, including myself, I shall do so. It’s why I’m here. But the truth of it is, I’m just talking about accountability. Y’all put it on me, I said, ‘Let’s share it. Let’s mean it.’ Accountability is: Nothing shall be done in secret that impacts your safety.” 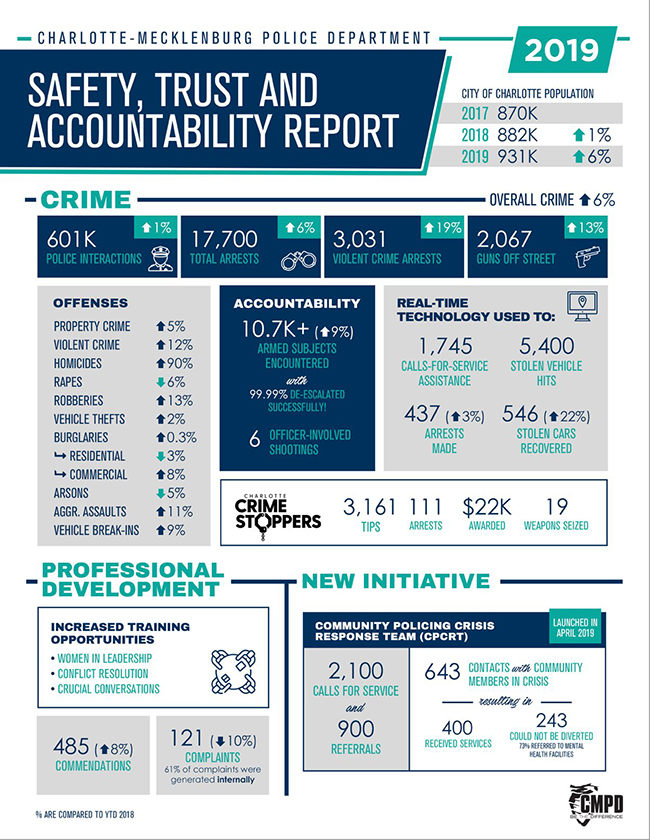 On Monday, the city launched a new interactive web app that allows users to keep up with any city-funded project. The Capital Project Dashboard (CPD) is an interactive map that allows you to check out the what, where and when for all city-funded construction projects. It includes projects in various phases of completion: planning, design, construction and complete. It will be updated quarterly.

Wondering what’s up with those bike lanes on 3rd and 4th streets? How about that ridiculous construction on Hawthorne Avenue? More than likely, you just want to know when you can stop seeing the guy holding a stop/slow sign on your commute, and figure out what the hell is going on there, anyway (it’s almost certainly a storm drainage improvement project or water main replacement). The CPD is a way to figure all that out.

The map also offers multiple overlays, including aerial imagery by year back to 2007, so you can watch the gentrification happen in fast forward. If you’re a nerd like me, you could get lost for hours. If you’re a normal person, it might get pretty boring pretty quick.

Double Murder Among First Homicides of 2020

A 43-year-old man became Charlotte’s first murder victim of the year near Hornets Nest Park in north Charlotte early Wednesday morning. Police responded to an assault call on Feldbank Drive just after 3 a.m. on Wednesday and found Devonne Smith dead of a gunshot wound inside a home. Another man inside the home was also shot. Police stated that they do not know the relationship between the two victims. No arrests have yet been made for Smith’s killing.

Just before 7 a.m. on Saturday, officers responded to calls about a car down an embankment on Atando Avenue in north Charlotte and found a man and woman both dead inside the car. The victims’ names have not yet been released. Anyone with information about the murders is asked to call the CMPD Homicide unit at 704-432-TIPS and ask to speak to Detective B. Sinnot.

'Come From Away' Brings it all Together