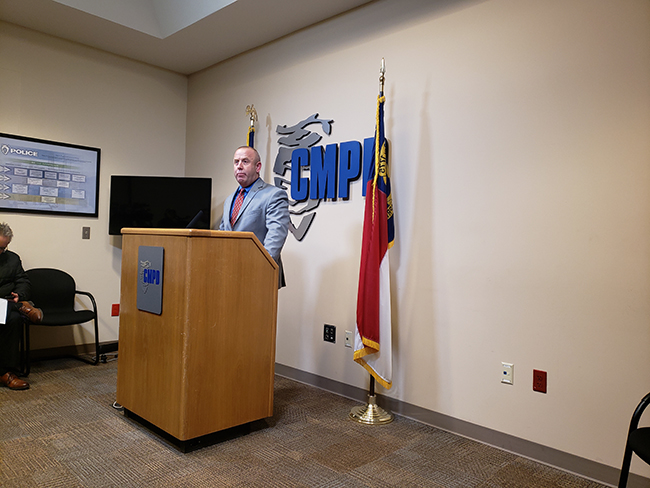 CMPD Warns of Public Danger with Murderer on the Loose

Capt. Rob Dance with the CMPD Homicide division held a press conference on Friday afternoon to warn the public that the person who killed 61-year-old Jennifer Banner in October is still on the loose, and police fear that they may strike again.

Banner’s body was found dumped behind a building on Freedom Drive just before 6 p.m. on Wednesday, Oct. 16. Dance would not comment on her cause of death, but called it the “most brutal, vicious” killing he had seen in his career. With no suspect description, no motives and no leads, Dance said that there were no reasons to believe that Banner was targeted by anyone she knew. The lack of any motive and Banner’s propensity for living a “high-risk lifestyle,” including participating in drug use and sex work, have led detectives to believe that she may have been victimized at random. Though police cannot definitively say whether Banner was participating in sex work at the time of her killing, Dance said it was a possibility.

“Regardless of what kind of activity these victims are engaged in, no one deserves to die like she did, but part of the investigation is to look into that,” he said. “She could have been targeted for that very reason. We want to make sure that everyone in the community knows that this person responsible for her death is still out there and could very well be targeting people who live a similar high-risk lifestyle … that could put them on a path to perhaps meeting the same person that’s responsible for her death,” he said.

Detectives are looking back through unsolved murders from recent years to figure out whether the suspect could be involved in other killings, but right now do not have reason to believe that the person is responsible for any deaths besides Banner’s.

Charlotte City Council approved several zoning measures on Monday, including a proposal to allow the construction of about 250 attached homes near Statesville and Oaklawn avenues, close to Camp North End. For at least five years, at least 10% of the rental units approved for residents who earn 80% to 100% of the area median income.

With a 6-4 vote, the council also approved a more controversial plan to allow the construction of up to 308 multifamily units in northeast Charlotte. The units will pop up on a 27-acre site near the intersection of Harrisburg and Sam Dee roads alongside Interstate 485.

Matt Newton, Victoria Watlington, Renee Perkins Johnson and NC Treasurer candidate Dimple Ajmera all voted against the rezoning on Monday night, citing concerns about population density and increased traffic for the residents who already live in the area.

The developers in charge of the new units from HH Hunt agreed to reserve at least 5% of the units for households earning 80% or less of the area median income.

Also at Monday’s meeting, council members agreed to provide $50,000 to the developer who is planning to build an entertainment venue, gallery and possibly a boutique hotel on the site of the historic Excelsior Club in west Charlotte. On Tuesday night, the Mecklenburg Board of County Commissioners voted to pitch in an additional $50,000. The Foundation for the Carolinas has already promised $100,000.

Though the building, which opened in 1944 and was an important African-American nightclub through the Jim Crow era, can likely not be saved, city leaders have vowed to ensure that the new development will look as much like the original club as possible and honor its history.

As Carolina Panthers owner David Tepper and Mayor Vi Lyles joined Major League Soccer commissioner Don Garber at Mint Museum on Tuesday in announcing that Charlotte will be home to the 30th MLS franchise, about 40 fans mingled in the plaza in front of the museum despite the rain to show support.

Inside, Tepper giddily exclaimed, “We’re the hot city, screw that other city,” referring to Atlanta. Outside, soccer fan and Atlanta native Andrew Averett suggested that Tepper take that city’s team as a model. Beginning play in 2017, Atlanta United FC already has one of the largest fanbases in MLS, based on 2018 attendance. In 2019, Forbes called it the most valuable franchise in the league, worth about $500 million.

When asked if he thought the new Charlotte team could build a decent fan base, Averett said, “I think as long as they do it like Atlanta did it, and Tepper’s got the money to pour behind it. You’ve got to have the academy like Atlanta did, which I heard they’re doing out in Eastland [Mall site]. I think if they do that and stand behind it, then yeah, Charlotte will be behind it.”

Aldo Ramirez, a Peruvian immigrant and part of the local La Blanquirroja fan club, said he’s lived in Charlotte for 19 years and has been looking forward to seeing more soccer here. One of the first people to leave the press conference handed Ramirez a black and white MLS scarf that said Charlotte on it.

“I’m happy today,” Ramirez said. “We are able to bring an MLS team to Charlotte. It’s a great story, especially with soccer growing so much. As it grows, multiculturally, different people from different countries coming into the United States, this is great for our city.”

One person in the crowd, however, wasn’t there to celebrate, per se. Holding a sign that read, “Soccer – Yay! Arts, Parks & Education NEED Tourism Funds TOO,” Scott Bryan said she was in support of the new MLS team, though she was concerned that $110 million dollars was set aside by the city from its tourism tax revenue for the team. The tourism tax money must be used on tourism-related expenses.

“I’m just trying to bring awareness that pro sports in Charlotte historically have asked for a disproportionate amount of public funding and that there are other organizations in Charlotte, like the arts for example, that do attract tourism and do add a lot of value to cities,” Bryan said.

Besides promising to put much of the money toward the promised Eastland Mall redevelopment, where the MLS will build a practice facility and corporate headquarters, Tepper did not give many more details at Tuesday’s conference. He said the team will take public feedback into account when choosing a name, which will be announced in 2020. Play will begin in 2021.

The North Carolina Justice Center (NCJC) is accusing the North Carolina Department of Labor (NCDOL) of handing out low penalties, engaging in lax enforcement and failing to investigate hundreds of fatality cases in the face of rising workplace deaths, following the release of an NCJC report earlier this week.

According to the report, workplace fatalities have risen considerably in North Carolina, especially when compared to the national average. Since 2013, NCDOL has presided over a 48% increase in deaths on the job according to its own measure and a 63% increase according to the U.S. Bureau of Labor Statistics. Five years ago, North Carolina had a lower workplace death rate — the number of deaths per 100,000 workers — than the nation on average. Yet while the national average has remained steady since then, North Carolina’s workplace fatality rate has increased from 2.5 in 2013 to 3.8 in 2018. At the same time, the number of workplace incidents involving fatality or hospitalization has grown from 115 to 146 since 2012.

Throughout this period, the report claims, NCDOL has embraced the idea that workplace protections are best enforced through promoting voluntary compliance among employers — providing trainings, recognizing success — rather than aggressively using penalties and inspections to ensure employers follow workplace safety laws. NCDOL’s voluntary compliance approach has failed to adequately protect workers, reduce the workplace fatality rate, or deter bad actors from placing their workers’ lives in danger on the job, the report alleges.

“It’s clear that NCDOL’s hands-off approach to workplace protections are ineffective at preventing workplace deaths — penalties are too low, enforcement is too lax, and investigations are too few to deter bad actor employers from putting their workers’ lives at risk,” said Allan Freyer, director of NCJC’s Workers’ Rights Project and author of the report. “If voluntary compliance were working as intended, we would expect to see North Carolina’s workplace fatality rate fall as overall enforcement does. But we don’t. Instead, we see weakening enforcement accompanied by rising workplace deaths, fatality rates above the national average, and a rapid increase in fatality incidents. NCDOL’s approach is simply inadequate to protect the lives of workers on the job.”

Two people were killed this week, bringing the total number of homicides in the city this year to 106. CMPD homicide detectives are investigating an incident that occurred in the popular Ayrsley Town Center on Friday afternoon. Investigators say a suspect hit and killed 56-year-old Robert Hopkins with their car intentionally at around 3 p.m. No further details were available at the time of this writing.

Just before 7 a.m. this morning, police responded to a call on Capricorn Lane in the Ballantyne area of south Charlotte after dispatchers heard arguments and gunshots during a 911 call. Responding officers found 43-year-old William Johnston dead from multiple gunshot wounds. It’s unclear at this time if detectives have any leads on suspects.

Erika Williams contributed writing and reporting to this roundup.

What Are You Holding on To?