Queen City Nerve editor Ryan Pitkin was doing some Christmas shopping at Green with Envy gift shop on Dec. 15 when he came across a ghastly creation: an apparent map of Charlotte, broken up by what looked like roadways and filled with designs representing landmarks that some Charlotteans hold dear — emphasis on the some.

Aside from the fact that the geographic placement of the cute designs was questionable at best, the map completely left out the entire west and east sides of Charlotte — parts of the city that are home to majority black and Latinx people.

Pitkin threw a picture of the map on Twitter with a caption stating, “This looks like a drunk person tried to describe Charlotte to an artist who’s never been here,” and the image immediately hit a nerve with his followers.

“Yet another Charlotte map that centers one kind of community here and completely eliminates another,” said Sam Spencer, chair of the Charlotte-Mecklenburg Planning Committee.

“The depth to which this is wrong is astounding,” responded Tryon Realty owner Jonathan Osman.

Others derided the seemingly random placement of roadways and landmark locations, while Clayton Sealey, who runs the @CLTdevelopment Twitter account, carped at the inaccuracies in the Bank of America Corporate Center drawing.

One woman, who describes herself in her bio as an urban planner, wrote, “this kind of erasure seems benign (much cute! so design!) but it’s actually very dangerous and perpetuates some of the worst parts of Charlotte’s history.”

And with that tweet, @ERG_CLT described why what was meant to be a fun map of logos drew such an emotional response.

There is a chance that Charlotte will never stop struggling with its identity crisis, as outsider influence continues to transform the idea of what the city is all about. Though there is no exact number of how many people move to Charlotte each day, most reports have put the math at around 60 people per day. Imagine the impact 500 people moving to a small city like Charlotte every week has on its identity.

The city’s history is slowly being razed and erased — a spreading rash of redevelopment in communities without the resources to push back. From Brooklyn to Brookhill, the history of black and other minority communities are regularly ignored by overzealous developers looking to squeeze in whatever new money-making project they can. Each shiny new restaurant, brewery or condo complex is then heralded by residents at the expense of culture and community.

A.B. Newton and Company, a Florida-based apparel and merchandise company, took full artistic liberty in curating its depiction of Charlotte. A.B. Newton co-founder and city map designer Will Blaine told Queen City Nerve, “There is a lot of artistic liberty taken to squeeze in all the imagery into the cozy confines of an 11×14 [inch] space. I try to make it all jive together with something that’s visually pleasing and somewhat representative of the city being created.”

We showed Blaine some of the social media reactions to his map of a “white washed version of Charlotte,” as one Twitter user called it.

“From their point of view, the print represents some of the things that frustrate them about Charlotte,” Blaine wrote in an email. “On a certain level this is what makes our prints so popular — they have places that resonate to the viewer and remind them of home.”

He stated that he often gets responses from viewers about his work, though not as pointed as the ones evoked by the Twitter post.

“I get feedback from locals, buyers and social media. It’s almost always positive or curious, with an occasional thoughtful critique,” he wrote.

“They are actually design elements that simply break up the map imagery,” he said.

As for the Charlotte map, it tends to center attractions frequented by the most affluent — and usually white — residents of the Queen City, many of which embody the beginning of gentrification in their respective communities. For example, the only locations referenced west of Uptown in the design are the airport, the U.S. National Whitewater Center, Pinky’s Westside Grill and a barn with a big cross that can be seen from I-485.

The map design is not commissioned by any public or private entity and is entirely self-curated by Blaine, so the art is based solely off the things in the city area that inspire him.

“I have a lot of fun doing the prints and there is no political agenda assigned to the imagery. The maps are self-curated so, animal sanctuaries, arcade bars, old theaters, and great eateries get play time. Colleges, universities, sports brands and famous landmarks also inspire. l also have fun putting ‘Easter Eggs’ in the maps that resonate with pop culture buffs or hyper-localists,” he says.

To Blaine’s credit, one major criticism from social media users — that historically black university Johnson C. Smith University was left out of the rendering completely — was unfounded. A bull’s head with the words “Golden Bull Country” can be seen just north of Uptown, which is actually closer to JCSU’s real location than many of the map’s other designs. Still, some mention of landmarks like Five Points, the Excelsior Club or Historic West End as a whole would certainly be constructive.

East Charlotte is home to a melting pot of African, Asian and Hispanic communities. These community members have built businesses that craft international cuisines and sell goods that often can’t be found anywhere else in the region, yet Blaine erased everything between Plaza Midwood and Mint Hill.

With recent discussions focused on how the arrival of a Major League Soccer team will mean the redevelopment of the old Eastland Mall site, some residents along the Central Avenue and Albemarle Road corridors are already concerned about what that development might mean for them in the next 10 years. Designs like this, ones that portray the area as barren — empty and developable — certainly don’t help.

Though we cannot blame the artist for rendering an image of what they perceive during visits, we do take the map as an opportunity to continue the discussion on the legacy and image that Charlotte promotes to the outside world. The fact is that Charlotte’s robustly diverse communities cannot be ignored, overlooked or erased as we take a step in becoming an international destination with a new professional sports team. Representation must be given to creatives, families, business owners and the like on how outside perspective like this can impact them.

Blaine said he regularly updates his city maps, adding landmarks based on feedback, though he emphasized that the maps are not meant to be taken as a realistic rendering of anything.

“The maps aren’t exhaustive in representation — I’ve had folks from upper-middle-class areas ask why their neighborhoods weren’t on the map,” he wrote. “At the end of the day you can’t make everyone happy, but hopefully on a certain level folks — regardless of their vantage — can embrace some of the whimsy from our ‘tipsy’ versions of their city and enjoy the print.” 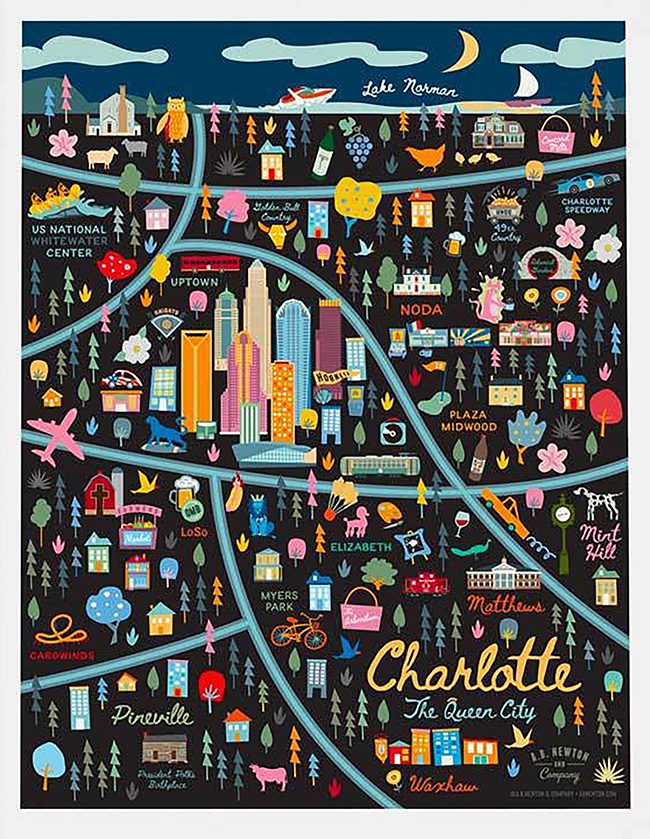