Due to the pandemic, gone are the days of waiting in line to be seated hip-to-hip with strangers. Many businesses have begun offering delivery and curbside pickup to accommodate this new way of living.

At Yum Yum Crumbs, a Black-and Native-owned bakery launched by husband-and-wife duo Mitch Miller Jr. and Sarah Kennedy on Jan. 12, the team preemptively pivoted their plans for a brick-and-mortar dining space to a commercial kitchen from which they could operate as a delivery, catering and takeout business.

The menu offers customizable servings that allow clients to order individually packaged desserts for family gatherings or private events, because who wants to share a communal cake in a pandemic? The menu is centered on their signature Yum Cups, consisting of layers of scratch-made cake crumbs and fillings like pudding, cheesecake, and jams, fresh berries, candy, buttercream frosting and sprinkles.

Like its customizable menu, the Yum Yum Crumbs team tailored its space and concept to create a pandemic-friendly experience, including a delivery structure that allows for a contactless experience.

The couple’s mission is to treat every day like a celebration, because “every day you wake up you should celebrate,” Kennedy said.

Growing up, cake was at the center of every celebration in Miller’s family.

“The times when his dad and mom were struggling financially, they always made sure that they had a cake, so cake is still, to this day, a big thing in his family and our family,” Kennedy explains.

The idea for Yum Cups came during a family outing when Miller brought up the concept of a build-your-own cake made for one person. The comment was made in passing, and he sat on it until the opportunity presented itself again.

Kennedy recalled taking his idea and running with it, or trying to anyway.

“I went down to the kitchen and tried to recreate the cake cup as he envisioned it on my own and I wasn’t successful because I’m not a professional baker,” Kennedy remembered. “That’s when we knew we were going to have to put in a lot more work”

The Queen City Nerve team tested a batch of Yum Cups recently, and after trying to eat one at my desk, I can confidently say that I’ve never felt more useless as an adult human than when I tried eating a cake cup and managed to get crumbs all over myself.

Kennedy told Queen City Nerve that, since opening earlier this month, things seem to have picked up. The pair is currently in the process of finding a food truck or building one from scratch.

In the meantime, Yum Yum Crumbs is accepting orders through Door Dash and UberEats, though Kennedy says people are welcome to place orders online or over the phone to pick up directly from the commercial kitchen, located on Latrobe Drive in east Charlotte.

The building blocks of a bakery

The development phase for Yum Yum Crumbs has been comparable with baking — taking the necessary steps and measurements and hoping that the final result won’t crumble apart.

The original plan for a brick-and-mortar space, conceived in November 2019, was put on hold last March when the pandemic hit. The two had located a promising storefront and were preparing to sign a contract when county and state restrictions were handed down, affecting how restaurants and other eateries were able to operate.

“We broke away for a little bit and then we decided to take a different approach,” Kennedy shared.

Right off the bat, Miller came up with 20 names for the future bakery. With the help of Kennedy and their new executive chef, a senior from Johnson & Wales University that they brought on to help with menu creation, they narrowed it down to five, eventually going with Yum Yum Crumbs.

They thought the name sounded fun and whimsical, like the product.

Dealing with the stress of attending school amidst a pandemic and trying to transition into a career, their original hire found another situation that was a better fit.

“When COVID, hit, they weren’t allowing them to do certain things, and during those three months, they kind of were on lockdown in the dorms,” Kennedy said.

Kennedy and Miller understood her decision and wished her well, then returned to square one in terms of building a staff. They restarted the hiring process and found a new executive chef by July. Laressa Rucker, who’s had experience at Charlotte staples such as Amelie’s French Bakery and Sunflour Baking Co., was the ideal candidate, someone with the experience that fit their vision. 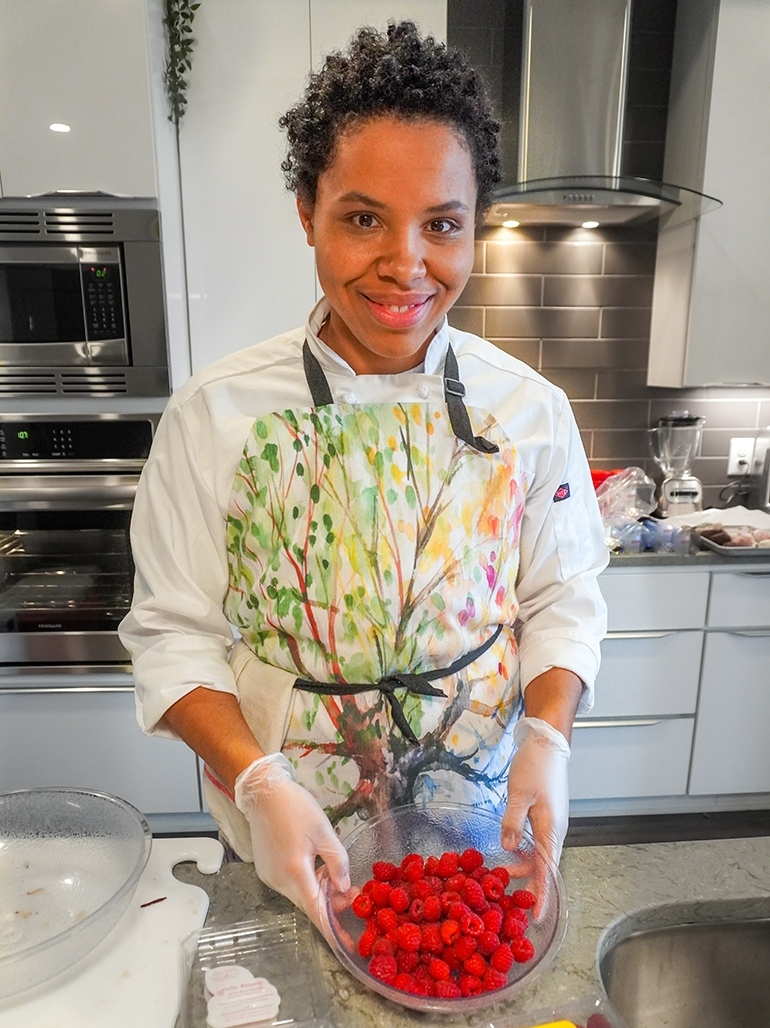 With Rucker rounding out the trio, the team went in search of feedback, baking and delivering hundreds of cake cups for tenants at nearby apartment communities, teachers and students of The Goddard School in Huntersville, and local charity organizations.

Giving away cakes was their way to see what was working, what wasn’t, and why, Kennedy said. “Anything that you put your effort into and you go forward with, there’s always something new to learn,” Kennedy shared of the long trial-and-error process. “I don’t think our learning curve will ever end.”

They spent the following months pinning down the right ingredients to perfect the recipes.

When Yum Yum Crumbs opened on Jan. 12, the menu boasted six signature Yum Cups in addition to customizable options. The range of gluten-free, vegan and keto options allows everyone to partake without the worry of allergies or dietary restrictions, a priority for Kennedy based on her own experience with health-conscious eating.

Miller and Kennedy grew up on different Native-American reservations, both located in New York. Kennedy is of the Seneca Nation of Indians, the largest federally recognized tribe in New York state, while Miller is of the Unkechaugi Nation in Long Island.

The two met in 2012, despite living six to seven hours apart, during a chance meeting for their respective families’ businesses. Kennedy worked as a sales rep for a Native-American tobacco distribution company, for which Miller’s family’s store was a client. They met when Kennedy came to the store to pitch products.

Yum Yum Crumbs is the first venture into the restaurant business for both Miller and Kennedy, though it’s not the only concept owned by the pair. In New York, on the reservation where Miller and his family built their lives, he still owns and runs a tobacco business. They came to Charlotte from New York looking for a new start, drawn in by the tempting prospect of not facing anymore harsh northern winters.

Miller travels back and forth between Charlotte and New York, though he spends most of his time in the Queen City, returning to New York occasionally to check on his business. Kennedy coordinates a jam-packed schedule for their daughter, bouncing around between kindergarten, dance classes, gymnastics, swimming lessons and taking care of their French bulldog named Chase.

“I think he requires just as much attention as she does,” Kennedy jokes.

Despite opening a commercial bakery in the middle of a pandemic, owning a business in an entirely different state and taking care of their rambunctious 5-year-old daughter, Miller and Kennedy still find time to bake for fun.

One would think that running a bakery for a living and being surrounded by cakes would get old after a while but, as a family, their favorite thing to bake together is cake. “Definitely, red velvet,” Kennedy shares.

As long as sprinkles are involved, their daughter is onboard.

“Our goal is to be able to create something that’s going to last for generations,” Kennedy says.

Before any plans for a brick-and-mortar concept turned into a commercial kitchen, and before they brought on Rucker, the couple began experimenting with the Yum Cups that would become their signature offerings from their own kitchen.

Their then-3-year-old daughter was present for all of those moments, acting as their tiny, less-experienced assistant. They’ve held on to those photos and memories of Yum Yum Crumbs’ humble beginnings for inspiration as they look to the future.

“You see her, she was 3 years old in these pictures,” Kennedy says, describing the photo collection. “She was sitting there with me and just baking right along, cracking her little egg and it was just cool to watch because we have so many pictures of her.”

Despite everything 2020 brought to the table, whether it was Miller and Kennedy having to dial back their brick-and-mortar plans or parting ways with their original chef, the duo has proved to be stronger than their setbacks. At the end of the day, Kennedy shares, they’re trying to build “something that can keep going forever.”

The Seeker: Time Affluence For the Overachiever